Sooner Football is back! Kinda. Today was Big 12 Media Day which marks the first real event until the start of the season, which is less than 50 days away. The Sooners, led by Lincoln Riley, brought Orlando Brown, Baker Mayfield, Ogbonnia Okoronkwo and Steven Parker. This was Lincoln Riley’s first ever Media Day as head coach of the Sooners.

Many questions surrounding the Sooners started with the first year head coach and if expectations would change. Baker Mayfield would be the first to let you know that Lincoln is the right man for the job. “He’s a great guy,” said Mayfield. “That’s why he’s the best thing for this program, not just because he’s a great coach, but the values he has off the field. He started the Grow U program. It’s about developing us off the field. All of our playing careers will be over one day, so how are you going to handle that and how will you know everyday things and how to handle certain situations? He cares about us as players, yes, but he cares about developing us as men, too.”

Not only will the Sooners look good on the offensive side, but expect more improvement on the defensive end too. Lincoln Riley is known as an offensive minded coach, but he’s definitely focused on the defense too. Steven Parker talked about some of the excitement surrounding the defense. “We’ve been working hard. Just talking about the secondary, everybody is hungrier. I’ve talked to them a couple times and I told them, last year ended well, but we have to start fast. That’s exactly what we are doing as a defense.” 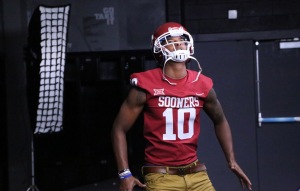 Another interesting quote from Mayfield, who has won back to back Big 12 titles, was directed toward proving himself. Mayfield was asked if he felt that he’d proven himself to everyone, and he responded with “I haven’t proven anything. I haven’t won a National Championship.” Mayfield returned for his senior season to do just that, win a championship. He was asked if Stoops retiring changes that National Championship plan and he was adamant that it changed nothing. “I feel great [about our chances.] I think we have had a great off-season. People are talking about Coach Stoops retiring, but Coach Riley has just done a great job.” Mayfield also let the media know that he thinks he can get his completion percentage from last year (71%) up and even higher this year. He said he thinks that this could be his best year yet. 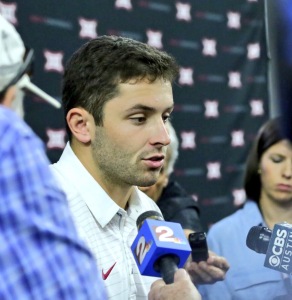 The Sooners had some jokes too at Media Day. Apparently, Mayfield wanted every player to wear their Big 12 Championship rings. Okoronkwo even left his at home and Mayfield made sure he went back and got it. When asked why they didn’t wear both of their rings, Obo responded with, “We didn’t want to blind anybody.” It’s almost football time in Oklahoma.
Article by Ross Lovelace

View all posts by rosslovelace