The Sooners basketball team concluded their trip overseas with a 110-85 win over Cairns Taipans Sunday in Austrailia. That win marks the end of a promising and convincing trip in which the Sooners went 4-0 and won each game by 20+ points.

Trae Young certainly proved that his hype was deserved as he led the team with 22.3 points per game. “On the court, we definitely came together as a team and played well,” Trae said. “We won all four games which was our goal – to compete and have fun. Off the court, we definitely got closer as brothers. It was great bonding time. These are moments we’re never going to be able to get back and are memories that will last forever.”

Young wasn’t just scoring though, as he also averaged seven assists per game. Sophoore Jordan Shepherd also impressed with his passing skills. Junior Rashard Odomes played great defense and nearly recorded a triple-double in one of the games.

Another Sooner freshman, Brady Manek, also played good and surprised fans. Although he wasn’t a five-star like Trae Young, Manek showed that he will be a force to be reckoned with as well, as he poured in 13.3 points a game. Christian James, who strugged mightily as a sophomore last season, went 12 of 13 in the four games, averaging 16.3 points per game. James was a big surprise and really showed his worth. Trae’s presence on the court seemed to help everyone out a little bit. 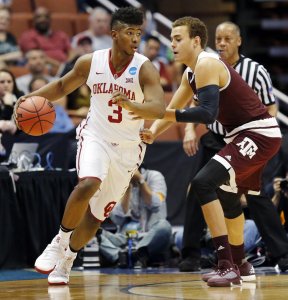 This Sooners team has a chance to be something very special this year. The bench is deep and there are shooters all across the floor. This team could realistically play 12 guys a night. They will be young, but very entertaining to watch. The Sooners have one more preseason exhibition, against East Central on Nov. 8 at home.

View all posts by rosslovelace